An exhibition of balancing statues hanging above the renovated Old Market Square in Częstochowa is the world's biggest exhibition of Jerzy Kędziora's statues held in public space. Fourteen statues create an overhead spectacle in which participants, seemingly levitating and defying laws of gravity, demonstrate skills characteristic to their professions, creating a sort of aerial theatre performance called „Częstoch Fair”, reminiscent of ludic festivals of old Poland. The patron of this „fair”, Częstoch, after whom Częstochowa was named, is standing at the center of this event, accentuating the 800th anniversary of first mention of our City in historical records. Jerzy Kędziora's balancing statues were presented in many cities in Europe and America, as well as in Asia.

Częstoch is a legendary founder of our City, who became an inspiration for Jerzy Kędziora. Artist created various versions of Częstoch's statue, imagining him as a warrior, wizard, ludic soothsayer or a noble. Statue of Częstoch featured in the Old Market is a realistic one, wearing a typical medieval attire and holding a horn and ceremonial staff, on which symbols referencing his legendary attributes were placed. 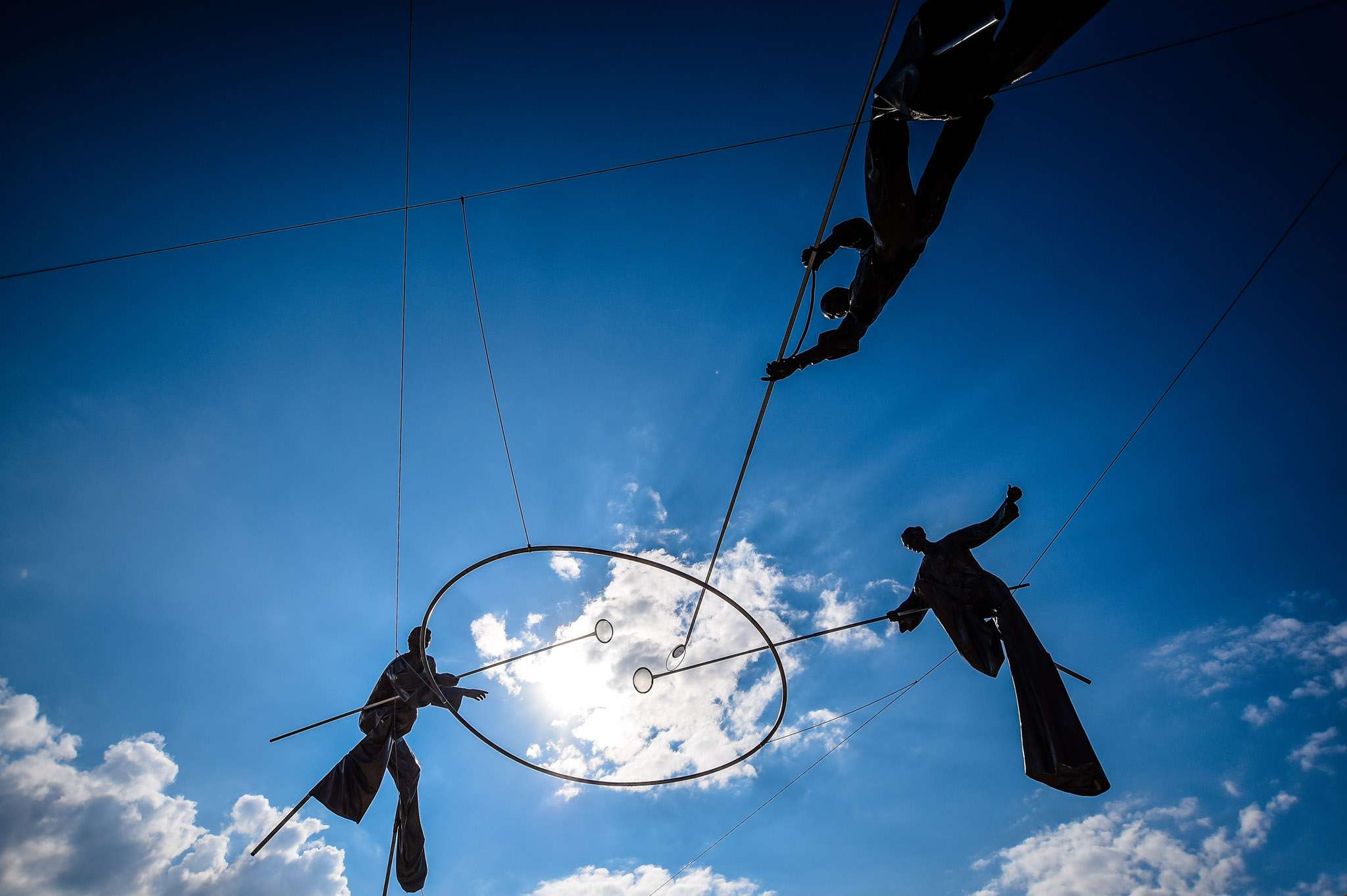 A group of stilt walkers plays a scene named „Water Filtering”. Three masters of stilt acrobatic arts, situated at the edge of the fountain, try to fish out with their telescopic scoops accumulated elements of energy, colour, structure and sound from the water stream. This composition has no references to former art or life events of Jerzy Kędziora. The stilt walkers have exagerrated proportions and are modeled in a peculiar way, showing determined cooperation to achieve a common goal. Introducing fountain water streams into composition multiplies its expression and impact. Small and loosely placed gadgets extend the impact of composition with delicate forms of kinetic and auditory infrastructure and adds to the charm of this side of fountain with effects of falling droplets of condensed water. Trio of stilt walkers became a sculptural dominant of Old Market Square, a dynamic introduction into Częstoch Fair (/Games) for those coming in from Holy Virgin Mary Avenue. Statues, reflected in the glass of nearby museum pavillon, multiply their forms and movements, thus creating a unique aerial spectacle. Stilt walkers are a dynamic contour that enhances the profile of this historical part of town. 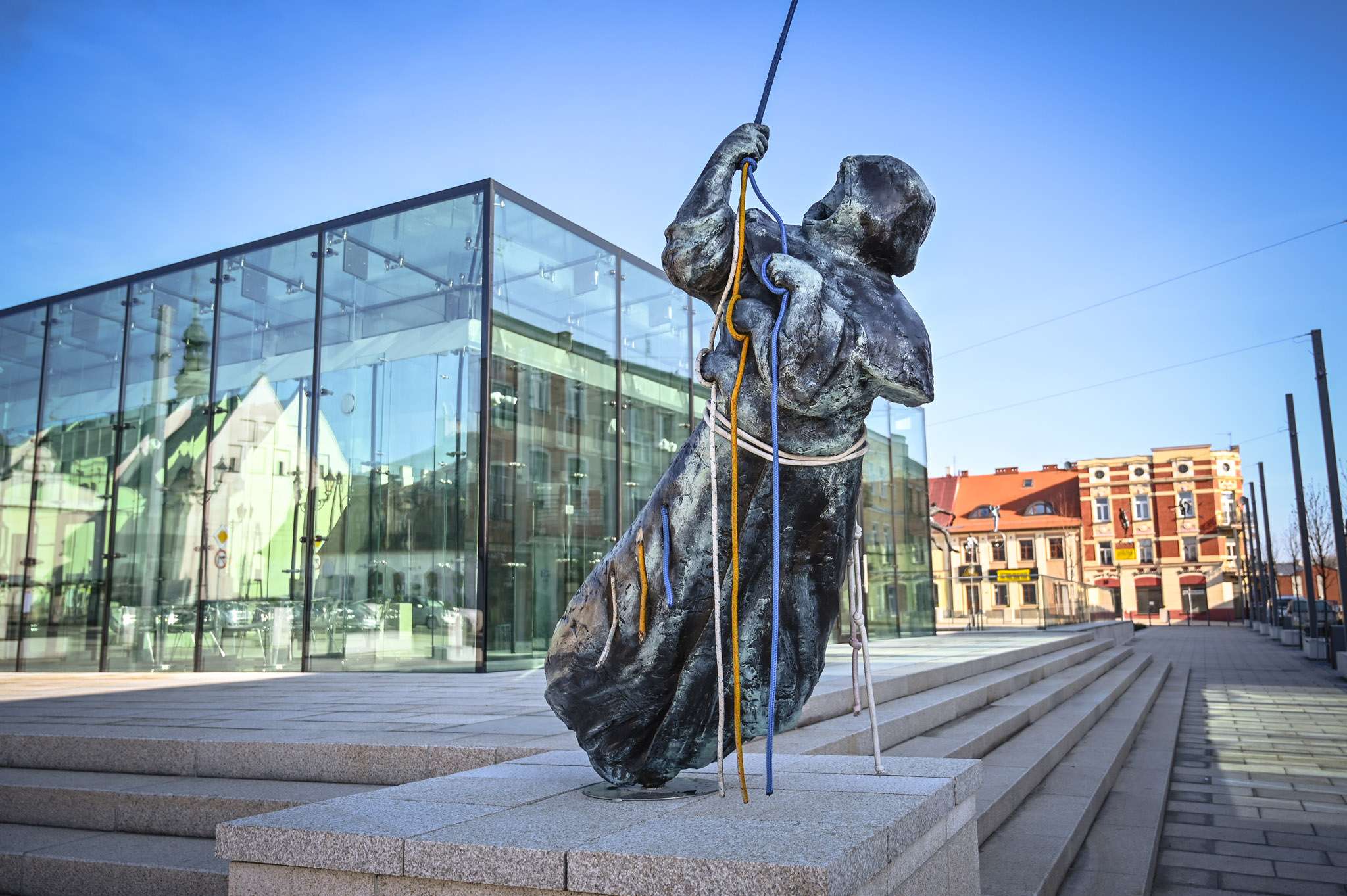 Bell ringer has situated himself on the corner by the steps leading to pavillon and with a mute sound of invisible bell he announces the beginning of Częstoch Fair (/Games). His hands tugging a dismembered and discolored rope underline, and possibly mock, the inaudible sounds and echo of the bell. Bell ringers body positioning alludes to the force and effort needed to make the bell ring, even though the rope is pointing to the sky and breaks off in the place where the bell would be. Multiple loose ends of colourful rope hanging from bell ringers hands accentuate the song of ringing bells, and their perpendicular direction visually holds the wobbly balance of the composition. A particular problem which artist solves by this statue is usage of a different type of kinetics and balance. The statue of bell ringer is supported by a singular point where its attached to the platform, and strongly leans beyond its outline while rotating in all directions, in opposite way to the swings of imaginary bell. 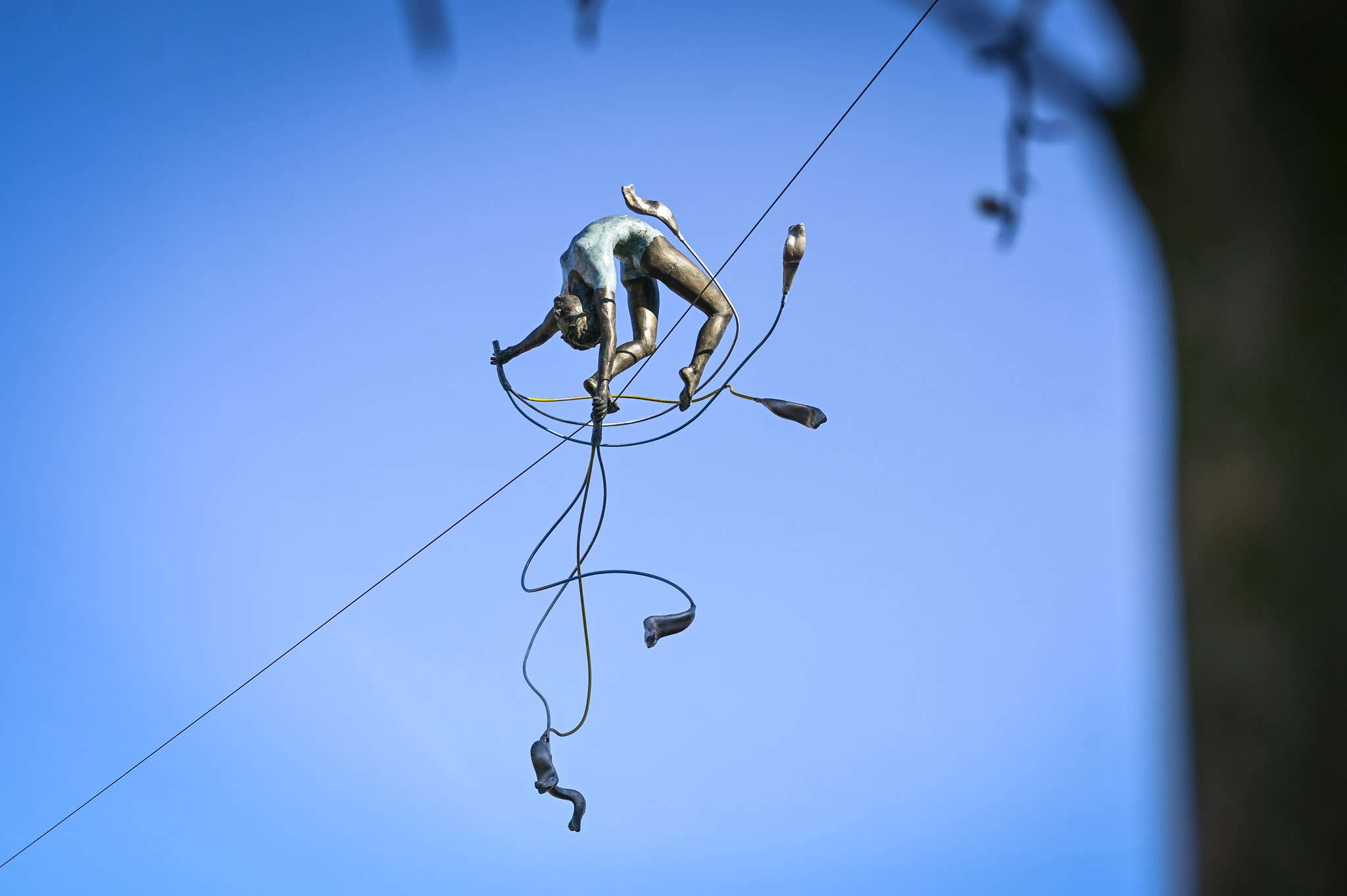 Little gymnast with whips is the only participant of Częstoch Fair (/Games) practicing artistic gymnastics with an unusual and casual object such as a whip. Concept of this young athlete's statue was born when the first granddaughter of Kędziora started to practice artistic gymnastics in a famous gymnastic sports school „Sokół” in Cracow. Young people full of grace and amazing abilities, juggling with their bodies and gymnastic instruments, intrigued the artist and made such an impression on Kędziora that he chose to use this stimulus to create a new form of balancing statues. 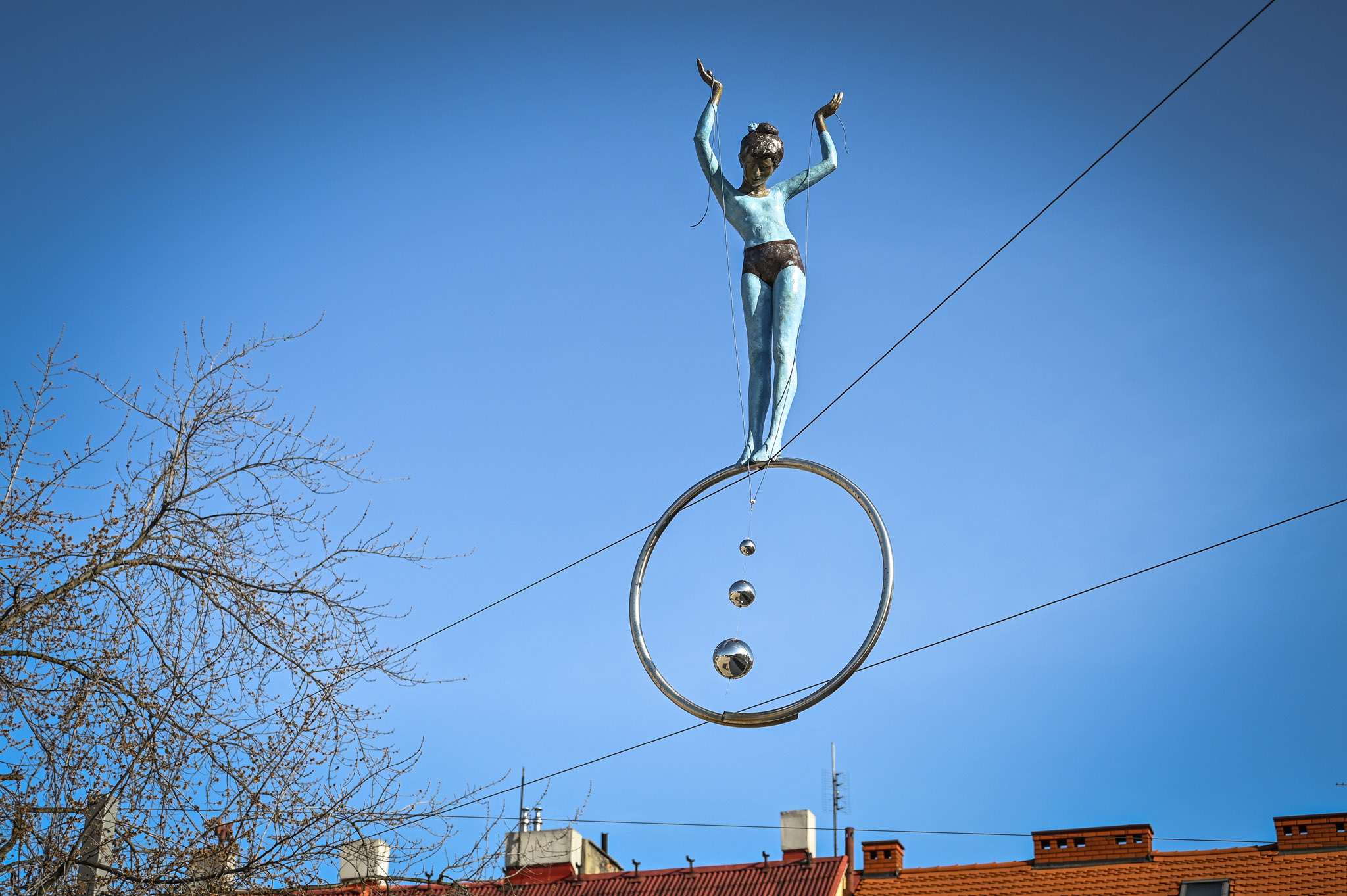 Small acrobat girl on a wheel called Little Girl of Pablo or Picassu is based on one of characters featured in Picasso paintings as a tribute to the contributions of this great Spanish master of modern painting. Jerzy Kędziora described that Pablo Picasso came to him in a very realistic and vivid dream, in which he asked him to feature his acrobat girl in his works. „Treat my painting as a base for your sculpture. You can do it” he allegedly said. I took this challenge – said Kędziora – and he never appeared again in my dreams, so I think that he accepted my work. 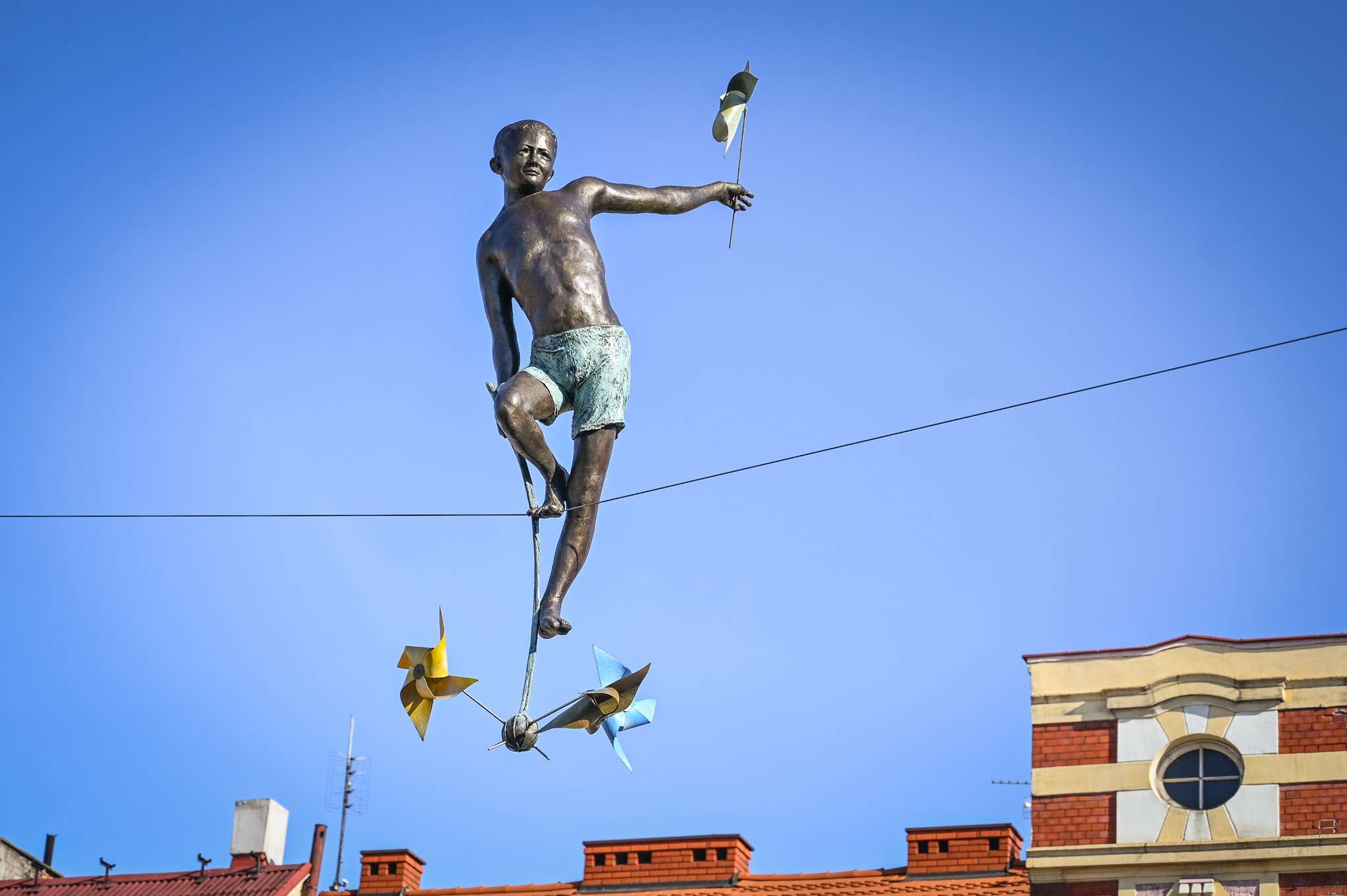 Boy with toy windmills is a part of group of boys, whose various attributes illustrate the legend about rafters children, which were scattered around the world after a tragic incident. Inspiration came from a story, told by the artist to his grandson, when he took care of him. A simple story became a long legend about rafters twin sons, whose great journey on a raft tragically ended at the mouth of a river. While creating this pair of boys, Kędziora wanted to portray features of his oldest grandson. Because he was 5 at that time, and the boys from legend were 12, the artist had to create an imaginary portrait of what he thought his grandson would look like in the future. In order to finish his project, artist remade his legend and in the final version it featured four small rafter boys. The main idea behind these statues was to place them in a distant cities in various parts of the world, from which they could communicate with each other by rays of sunshine reflected on mirrors. This ray is supposed to be magnified with additional mirrors by participants of a special happening. Maybe the boy featured in Old Market Square will also be a part of such a happening in the future. 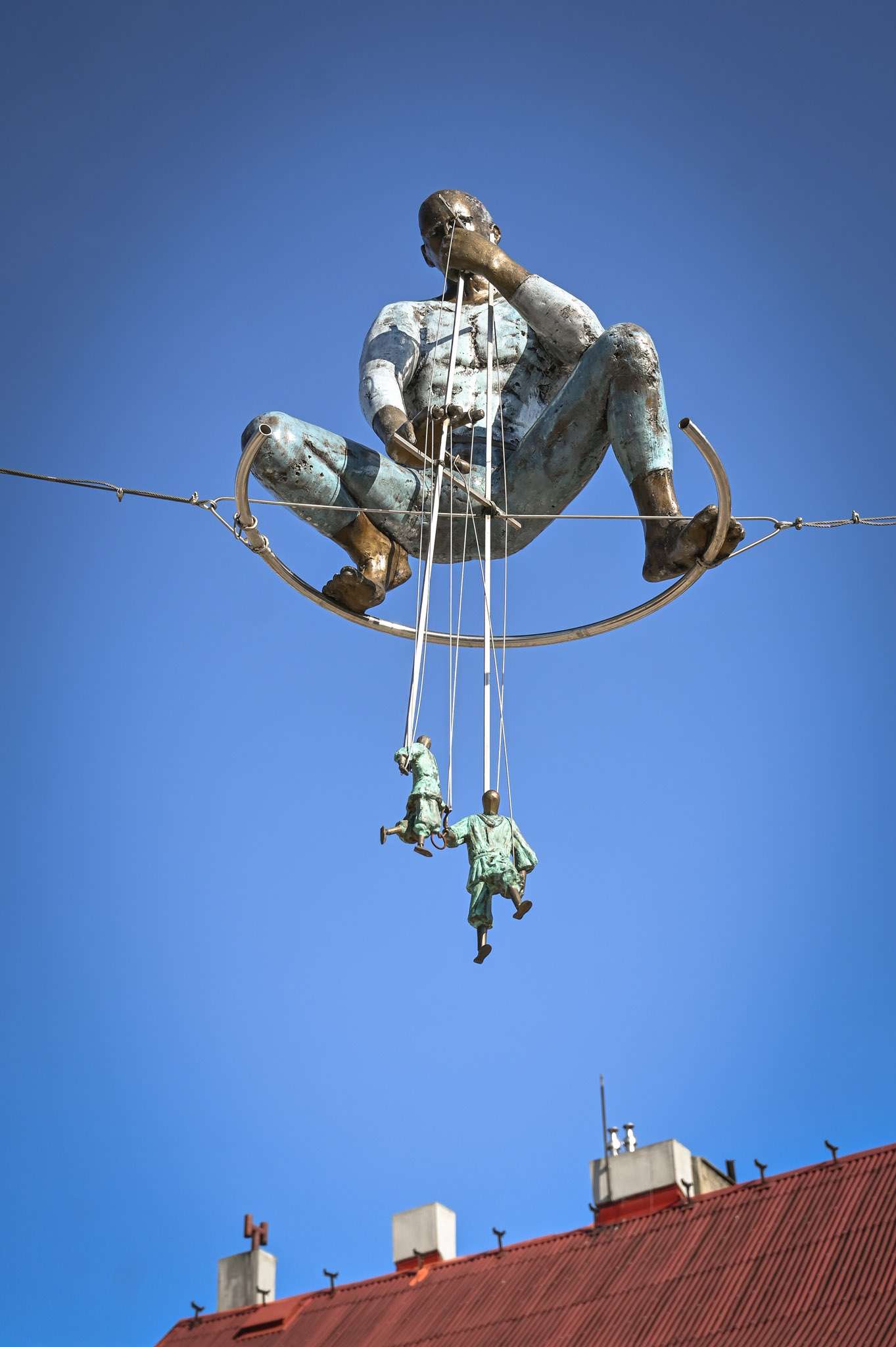 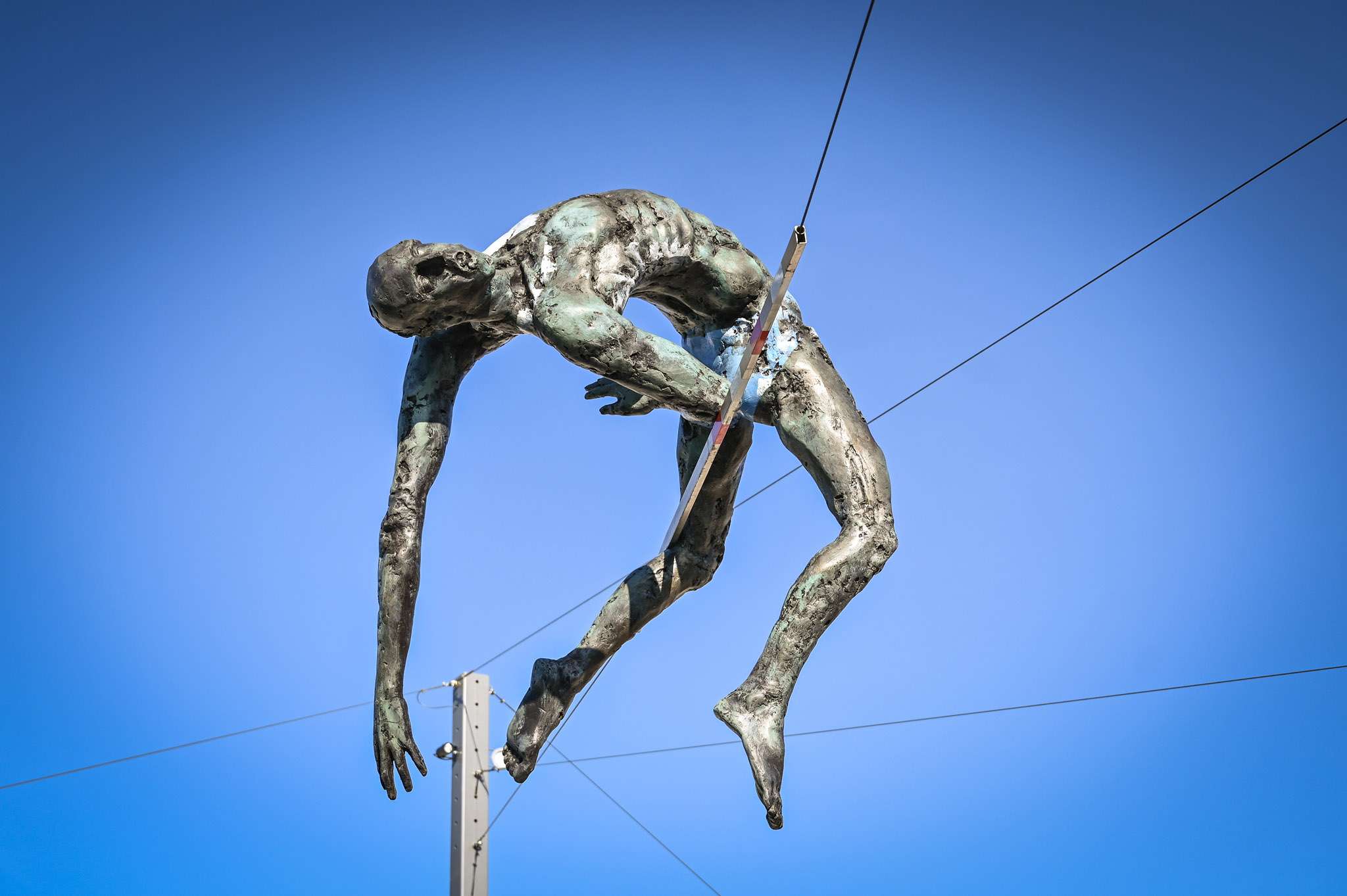 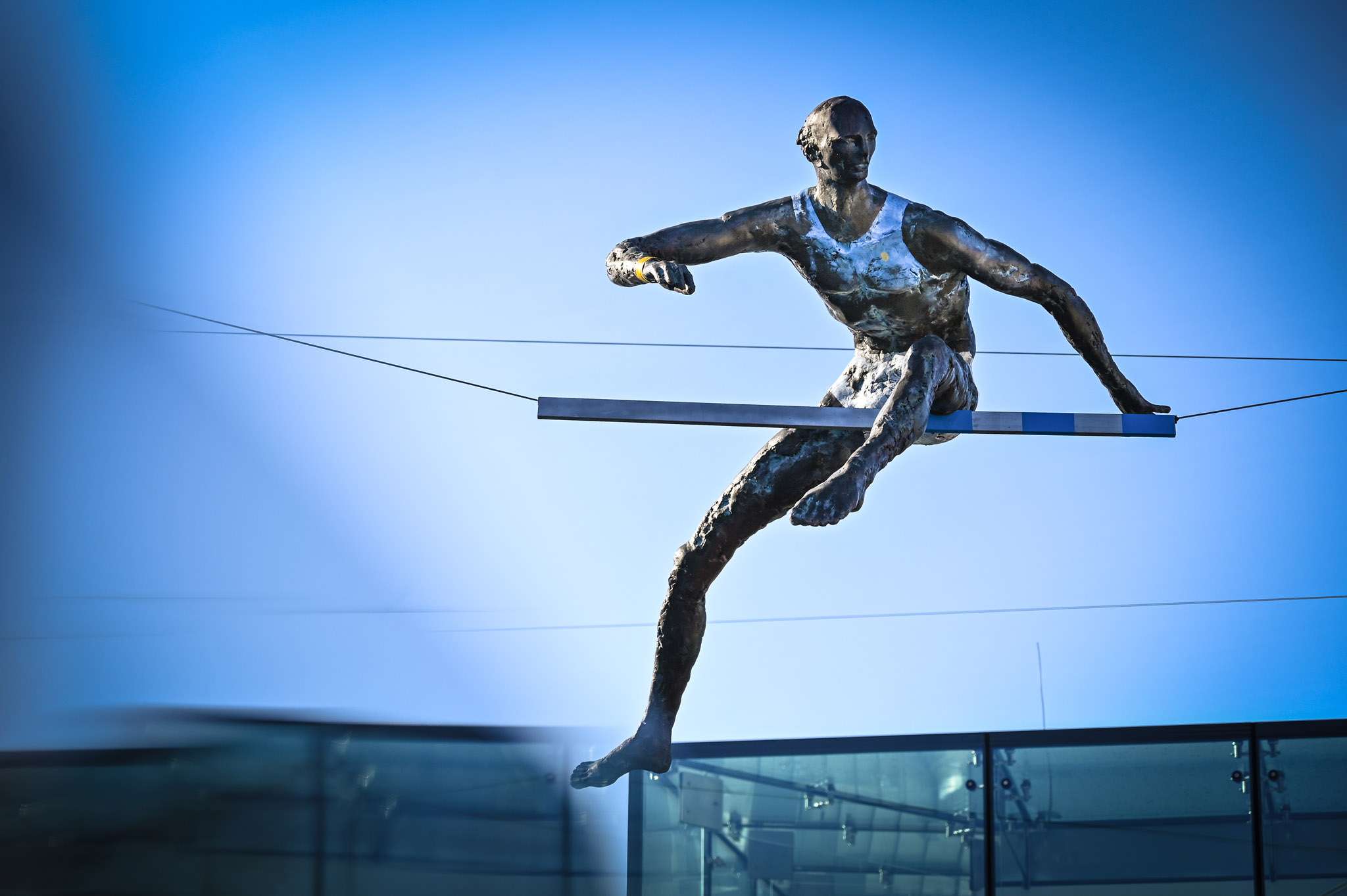 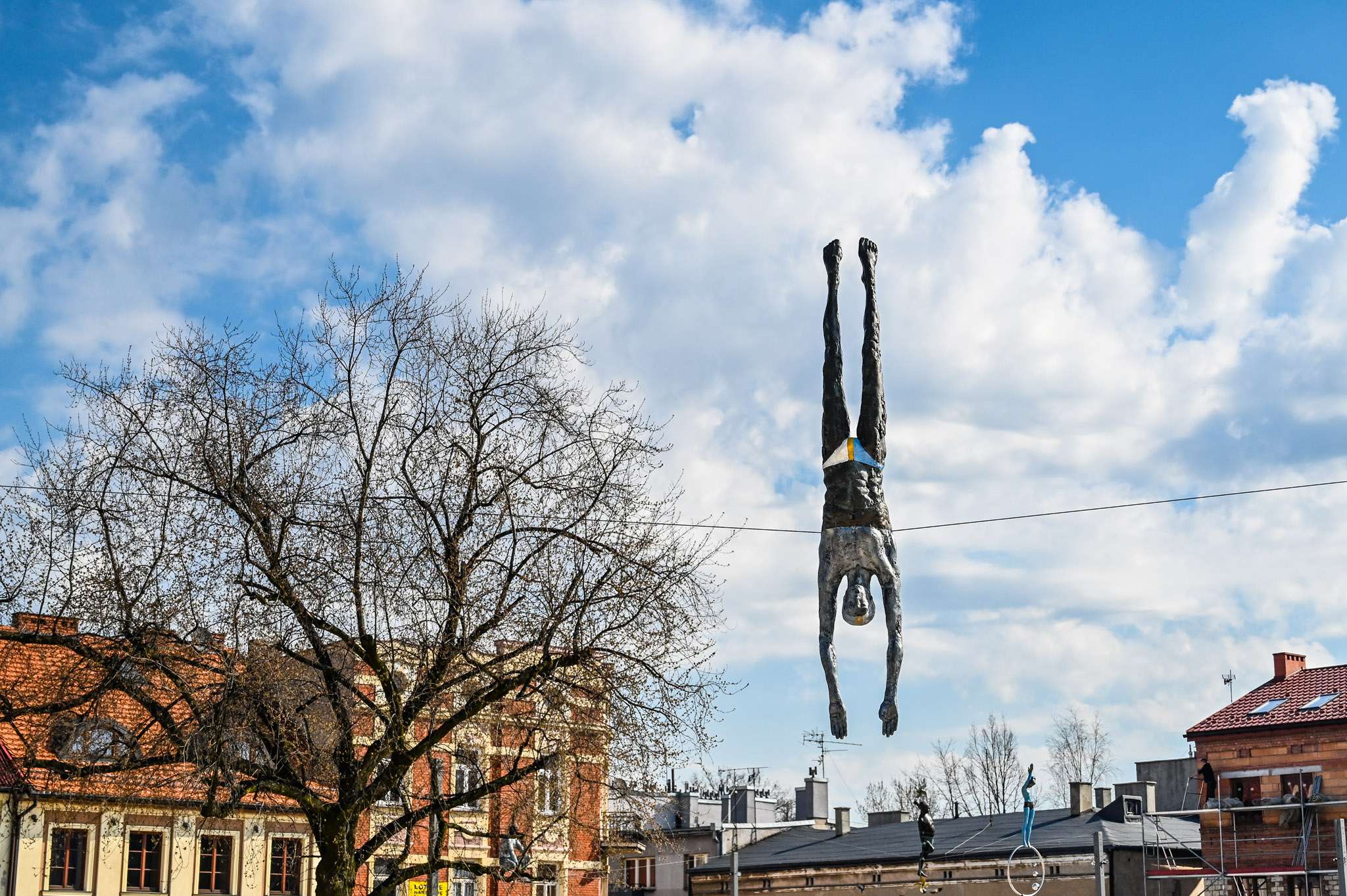 A group of athletes was meant to demonstrate their sport disciplines in the amphitheater near the expo pavillion. In the end it is the hurdler and high jumper who are presented in this space. Water jumper who was meant to join them switched his place with the Trickstress when he decided that his skills will be better suited near the fountain, where he is jumping to the imaginary pool. Sport in all societies plays a major role, enticing many enthusiasts – both participants and spectators. The same can be said about Częstochowa. In history there were basically no festivals without an element of sport, and it is also the case in Częstoch Fair (/Games). In a dynamic and expressive form Kędziora relates to the antique heroes, affirming the more modern disciplines. On the Old Market Square he presents a hurdler, high jumper in middle of his jump above the pole and a water jumper. 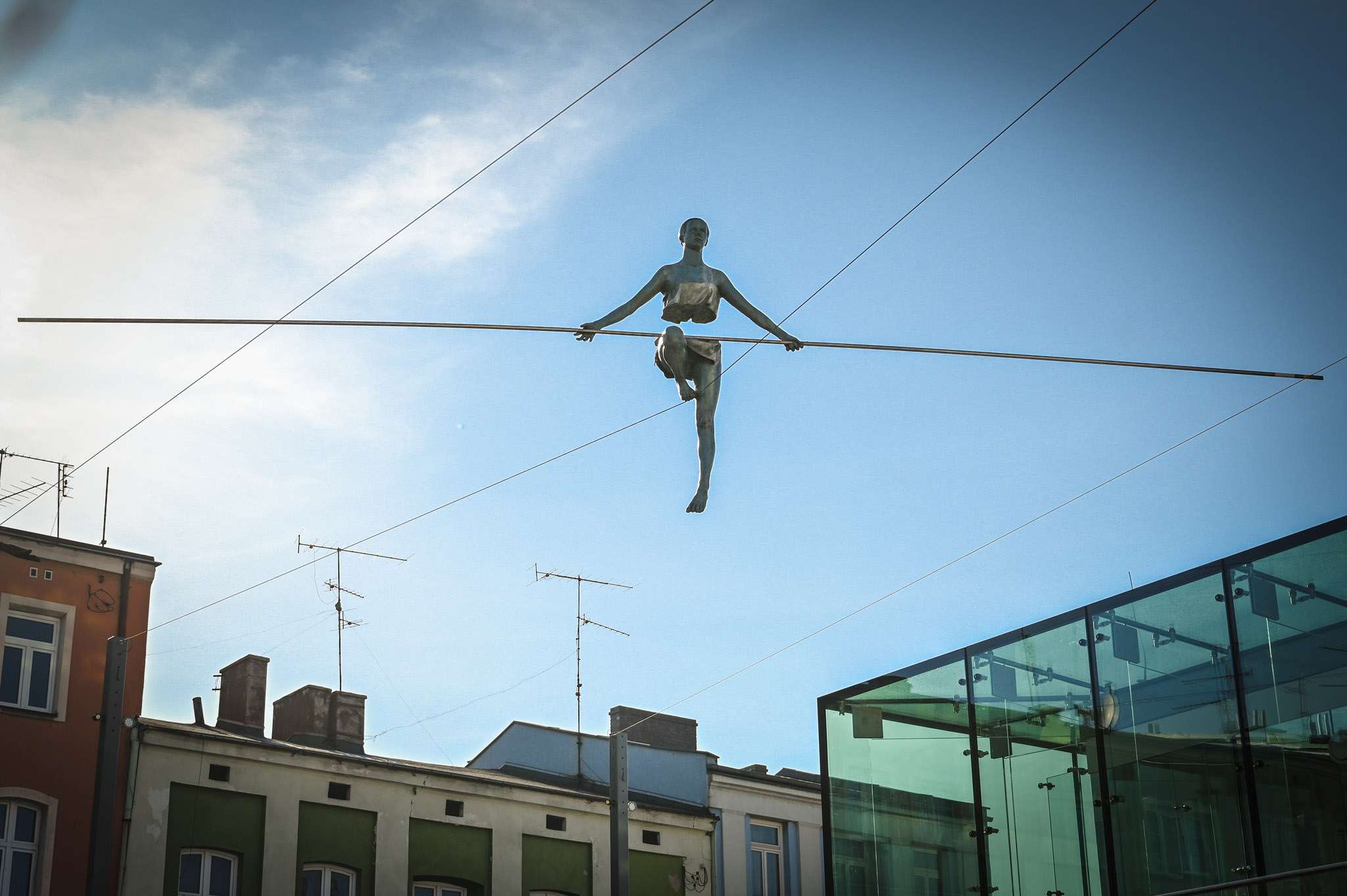 The Trickstress agrees to become an arbiter in these sports games. It is a young woman (based on his daughter-in-law) who co-creates a whole family of equilibrists with features based on various references, both symbolic and based on personalities. In this case the acrobat shows her amazing illusionist performance - „Losing the Belly”. Top part of the statue is separated with a large gap from the bottom part and hangs freely just above the waist line. Her feet are placed on a rope and the top part is supported by the balance pole and arms, creating an intriguing effect.

Philippe Petit – French equilibrist, seemingly resting, greets the spectators of Częstoch Fair (/Games). During preparations for his „Balance in Nature” exhibition in Old Westbury Gardens in New York, Kędziora met Philippe Petit, a world class equilibrist whom the artist admired for a long time, even more so after watching a movie „The Walk” based on equilibristic feats of Philippe Petit. The sculptor not only appreciated his breathtaking skills and evolutions on rope, but also his choice of challenges to overcome and his stealthy way of achieving his goals. Kędziora felt that Petit's work is parallel to his, at least when it comes to overcoming many difficulties concerning organisational and technical aspects of his work. Likewise, the archmaster equilibrist was also impressed by Jerzy Kędziora's statues. Both artists liked each other so much that Kędziora created two statues based on Philippe Petit's profile – one in historical stage attire and one dressed like the equilibrist when he conquered the famous walk between two towers of World Trade Center.(Komentarz: dalej jest o tym że pandemia przeszkodziła w wystawie rzeźby w NY, ale jak tylko się ona tam pojawi to tekst nie będzie już aktualny a ulotka pozostanie, myślę że można to ostatnie zdanie pominąć).

Charlie Chaplin is another great cultural celebrity to whom Kędziora dedicates one of his works. Artist appreciated Charlie Chaplin's mastery in designing his gags, especially those incorporating inanimate objects and presenting serious matters in a joking and grotesque manner. In this case the great cinema magician tries to perform a simple gag with balloons – he is walking up the rope, but the elusive balloons do not seem to want to cooperate with his endeavour.

The task was co-financed from the budget of the Częstochowa City Commune. 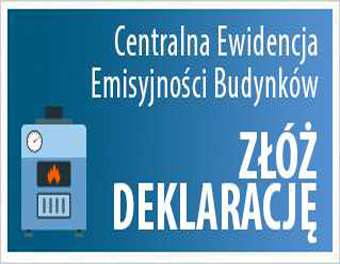 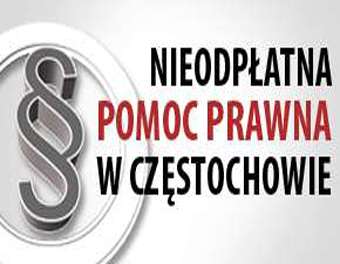 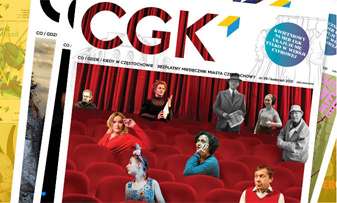 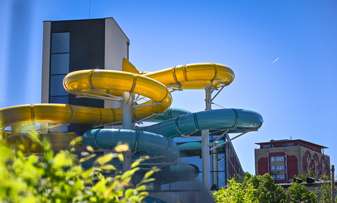 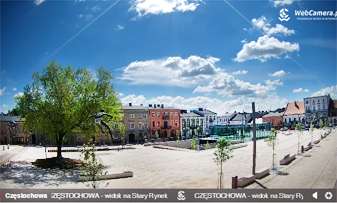 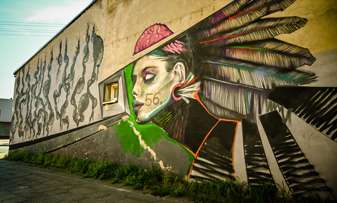